Wow, what a busy end of 2011 it was. At work, we were preparing for advertisements to go live on January 1, and since our last day of 2011 was December 22, we had to have everything ready for day one of 2012. We spent several late nights at OMD to prepare for this. For the first time in 56 years, State Farm updated its logo, so we had to swap out all of the old logos with the new ones, so that took some time as well. When we arrived back to work on Jan. 3, most went well for what we planned, and now we are working toward moving forward for Q1. Though during our time off, I had the opportunity to travel about…

After work finished in December, I took an Amtrak train home from Chicago to Kansas City. Early in the morning, I boarded the train at Union Station in Chicago and went southwest toward St. Louis. The train went through many small towns like my hometown, many of which come see the train go by. Once in St. Louis, I had a four-hour layover, so I walked around, got lunch and later boarded to Kansas City. By then, the view out of the train was black on the Missouri River Runner train. The last stretch made me very tired, but thankfully my parents were at Kansas City Union Station to drive me back home.

Home for the Holidays

It was nice to get home again and have some time to rest. The first day back, I spent time helping grandma get ready for Christmas lunch at her place. The church Christmas Eve program was held on Saturday night, a program that has been going for about 70 straight years. For a rare occasion, Christmas day fell on Sunday, so we returned to church once again the following day. We raced home after service to open gifts before the big lunch. My main gift this year was an Xbox 360, something I’ve missed since leaving college! Clothes, headphones, hockey tickets and money highlighted the other gifts. The day after Christmas my sister Jeni and I helped grandma take down her holiday decorations. Grandpa’s birthday is soon after, so she has always made an effort to separate the holiday season and his birthday. The next day Jeni, mom and Jeni’s friend Kaila went on a trip to Knoxville, Tenn., to see a University of Tennessee women’s basketball game. I traveled with them to the airport in the wee hours of the morning to catch my flight, which was headed more northeast.

To be honest, my trip to New York was a nightmare. My flight was slated to leave at 7 a.m. from Kansas City directly to the Big Apple. I boarded the plane, where we sat there for two hours waiting for maintenance to be completed. Then, they told us to exit the plane and wait in the lobby while they worked on the plane. Another two hours in the lobby area… The flight team then came out and told us that the new part wouldn’t sync with an older plane, so the flight was canceled. All rushed to the ticket counter to rebook a flight. My reroute was through Minneapolis. Unluckily for me, my flight to Minnesota was delayed because the sink was leaking in the lavatory. I waited not as long as the first attempt to flight, and finally got off the ground and out of KC. When I got to Minneapolis, I had to rush across many terminals to reach my next flight, which was just boarding when I arrived. I quickly got off the ground again and headed to my destination. Once we got near New York and started to descend, the plane went through some terrifying turbulence because of high winds and a storm. The plane behind us made an emergency landing in Boston, but we went ahead and attempted to get to New York. Nothing to me has been as life-terrifying as that flight. I have no problems with flying, but that was a bit shaking. I took a cab from LaGuardia airport to my friend Chelsie’s place in TriBeCa.

She lives in a large apartment that two older ladies use as their workspace. Rent, as you know, is ridiculously high in the city, so most of your income goes to rent. We chatted a bit, watched a movie and then went to bed. She had to work most of the week, so the next day I met her for lunch and walked around a bit. My friend Duane from KU also moved to NY recently, and he was just flying in from Kansas City. He was bringing home Chase, the dog I used to look after sometimes in college. Apparently Chase got loose on the tarmac and cars had to chase him down over the runways.. what a mess! I met up with Duane and the dog for dinner. The next day my friend Cherie, also from KU, met me in the city and we did a bit of sightseeing. We started out at Chinatown, went south through the Financial District and Wall Street, and walked by the construction of the World Trade Center site. The WTC site is still an eyesore, as walls are up for construction. The construction of Freedom Tower is also underway, but someone told me they are having trouble selling office space there because of the potential terror threat and the constant memory of September 11 right outside the windows. After that, we went down to Battery Park and caught the Staten Island Ferry, which has a view of the Statue of Liberty and Ellis Island. Cherie and I did a bunch of sightseeing that day, and we ended our day at Times Square to check out the lights (and thanking ourselves for not going there for New Year’s Eve!)

On the 30th, Cherie and I went to lunch at a diner close to the Empire State building. A new clothes store UniQlo was nearby, and I found the best fitting pants I’ve ever found! I got a few pair and called it good. Our friend Duane works at Columbia University in Harlem, so we met him to check out his office and later went back to TriBeCa to meet Chelsie and friends for drinks. New Year’s Eve Day we spent relaxing before going out on the big night. We got ready to go to Chelsie’s place for appetizers and drinks before leaving to Chelsea Piers. At 10 p.m. our yacht left the pier from Chelsea and went down to the Statue of Liberty for midnight. For the countdown, we went to the top of the yacht and counted down to 2012. In our view was the Statue of Liberty with a long fireworks show. Can’t get much better than that for New Year’s! Because of the chilling wind off of the Hudson River, we went back in the yacht and drank, had dessert and danced into 2012. At 3 a.m. the yacht docked and we got off. I was ready for bed after a long night. 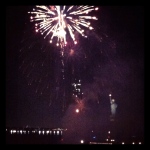 On the first day of 2012, I slept in, had lunch at a diner and walked around Central Park with friends. It was a good way to end the trip and the weather was even more pleasant. My flight was that evening, so I packed up and headed back to LaGuardia. My flight home was not as bad as the previous experience, thank goodness. Gaining an hour based on time zone change, I got home to my apartment at midnight. Glad to be home, but loved every minute of New York!

Now my next break is Martin Luther King, Jr. Day, but I’m content with getting back into routine. Here’s to a great 2012!

Hello! Thank you for visiting my blog. Originally from a small town in Kansas, United States, I got the travel itch during an internship in London in 2011.

From then on, I’ve made it a life goal to become culturally and professionally diverse. Every year I set out to visit at least two new countries. Like most professionals, I only have about 2-3 weeks of vacation time, and I know it can be hard to make time to travel. Travel now, or you likely never will. Share your experiences with others. Follow me as I experience the beauty of the world!